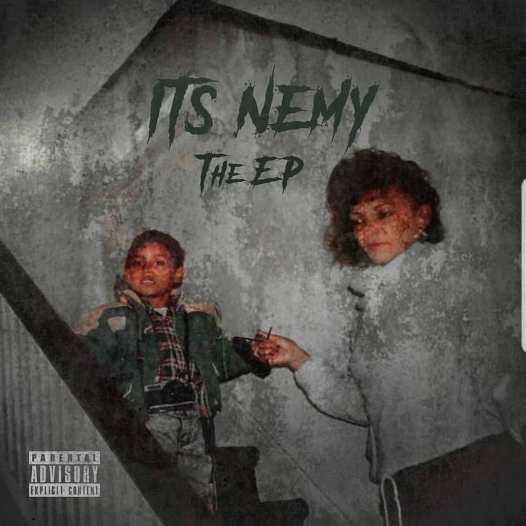 Today I will be reviewing Nemy’s EP, “It’s Nemy”. He is a San Diego based rapper. I first heard Nemy on Smalls Uno’s project Beastmode that I reviewed earlier this month. It’s a dope project that you should also check out! Also if I’m not mistaken I came across Nemy on HipHopWeds IG story where he was performing at the AC Lounge. Even though the clip was short I noticed how he engaged and hypnotized his audience with his performance. I heard he was dropping an EP via social media and I had to show support!

I purchased his EP on Amazon and pressed play. I was very impressed by his lyricism and mesmerized by his storytelling. The EP consists of 7 tracks. I actually am a fan of EP’s since you get a taste of who the artist is and most of the time all the tracks are cohesive with great content and no fillers. This project was one of those examples! From start to finish Nemy takes you on a lyrical rollercoaster ride. This EP will make you laugh, cry, get angry and feel inspired! The production and beats fit perfectly with Nemy’s gritty voice.  You can hear and feel Nemy’s emotion in every verse!

Each track tells a story that captivates the listener. The EP begins with the track ” I O U“. Right of the bat the beat is amazing with a dope sample. He shows of his lyrical abilities and proves he is nothing to fuck with! I mean he says, ” I’m out of this world I got my own spaceship!”. This track sets the tone for the rest of the EP.

His second track is called, “Georgy Porgy“, it is one of the standout tracks in my opinion. It is an emotional and socio-political track. Mainly touches on Trayvon Martin’s killer George Zimmerman.  In the song Nemy touches on various topics from Trayvon’s tragic murder to the corrupt system that has and continues to work against minorities to keep us down! Nemy sums it up perfectly when he raps, “You think it’s gon’ change you get your President impeached, sheesh?!”.

Nemy also has his hit, “Mr. T” which is a track with a catchy hook and dark humor! Definitely a banger to bump in your car! He also has a track called “Mami Luchi” that consists of a voice message from his grandma. I loved that given I too had a strong bond with my grandma. It’s dope he reflects his respect and love for her in his music. He has a lyric in one of his songs where he spits, “My grandma is like a saint to me!”. I could relate to that 100%! In the message she describes Nemy and how he has always remained the same and loves him for that. This adds a personal touch to the project. As well as displays his vulnerable side and shows Nemy is as genuine as they come!

The EP also has a track called, “Spooky Kinda Luv“, which is a funny, morbid, weird love song! The second to last track “Sometimes/Sit Down” touches on his struggles and pain he has dealt with. He also shows how he still pulled through! The final track, “It’s Nemy“, is another standout track for me. It has a chipmunk vocal sample. The song is an anthem for those who have been through the ringer and overcame their struggle. In this track Nemy gets a little introspective and talks about just that! He proves to his haters that he made it and he will continue to thrive!

I just had the opportunity to meet Nemy briefly at one of his shows. He is a humble dude and I see longevity in his career! Listening to this project I got to see a glimpse of who he is and how his mind works! Glad I bought this album! It is an amazing project to just bump on your way to work, at the gym, getting ready to go out or while your doing your daily routine! San Diego Hip Hop scene is thriving and Nemy is proof of that! Oucchhyy!!! Spooky season is in full effect!!! Go show support and cop Nemy’s EP!

“Don’t prey on the weak
Don’t shit where you sleep
Keep your eyes off the sneaks I bought my son last week
Practice what you preach
The cocaine whiter than the god that they teach
Brown skin, hair ?? that some shit that they don’t preach
You think it’s gon’ change you get your President impeached, sheesh?!”

“Cuz shit gets fuckin’ real sometimes
What you do? For the $100 dollar bill sometimes
What, it makes you want to kill sometimes
But wait, I’m just tryna kill some time
Ya’ll tryna destroy, I’m tryna build sometimes
It takes a lot of pain to help you heal sometimes
I never fuck her when I’m juggling rhymes
And these streets are like a motherfuckin’ jungle sometimes, It’s Nemy!”

“I give you these no pen involved
It’s hard to be a GOAT without a set of horns! Oucchhyy!
And fuck a piece of the pie
Nemy just want the recipe
I think that you livin’ a lie
I don’t believe what you tellin’ me
And no I do not wanna buy, nope
The bullshit that you sellin’ me
You wanna live in the skies
I’ll do you a favor you live in the skies
I looked at the Devil, I stared in his eyes
I weathered the storm I fuckin’ survived
All of my losses I took them with pride
I walk with a purpose just look at my stride!”

One thought on “Nightmare on Sedgwick Avenue – “Oucchhyy! Spooky Season is Among Us! – Nemy – It’s Nemy EP Review””