Today I will be reviewing another album from Smalls Uno aka Sire Spooky aka Spooky Gang! Smalls Uno is part of the Spooky Gang collective that I am blessed to be a part of. Smalls is actually the founder of the Spooky Gang! This year he has now put out two projects this EP included. If you recall I reviewed his first project of 2019 “Beast Mode” earlier this year! I became an instant supporter. I met Smalls and we became fam and now the Spooky Gang is a collective of about 15 individuals who are currently killin it! The album I am reviewing today is “Spit Fire & Die Rhymin”. Smalls worked on this project with dope Producer Ray Flaqui!

The Production on this whole EP is grimey and spooky as they come! Ray Flaqui found the perfect sound to match Smalls Uno’s dark lyricism! The intro track, “Backdraft” sets the tone! You don’t wanna battle him tho!!! I also love the title of the intro track goes with the fire theme of this EP! Smalls definitely crafted a concept and followed through. This is a very cohesive body of work from top to bottom. After the intro track we are blessed with 4 ill tracks! The second track is called, “Death Dance” which goes hard! Enraged rhymin’ at its finest! The beat tho, Ray you killed it on this one! 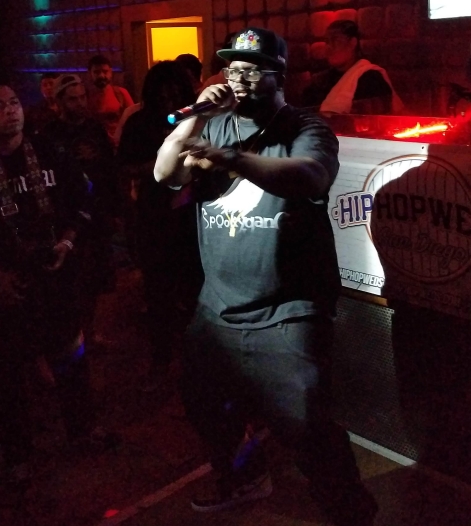 The third track is, “As I Knew It” ft. Indian K who is also part of the Spooky Gang and also has his crew Sky High Krew! Smalls and Indian K spit about their lives and the shit they had to deal with in the streets and struggles they survived! The fourth track, “Paintin In The Rain 2” I love the jazzy sample, “Last Tango in Paris”. Smalls brings the smooth lyricism. The final track is, “Numb” you get a blaxploitation funk type beat. Smalls shows why he is someone who can’t be fucked with lyrically! The rap god! What a way to end the project! Go support real rap, dope lyricism and amazing Production! Cop this EP you won’t regret it! Spooky!!!