Brief synopsis:
“In the summer of 1984, five friends escape Los Angeles to work as counselors at Camp Redwood. As they adjust to their new jobs, they quickly learn that the only thing scarier than campfire tales is the past coming to haunt you.”

Today I will be reviewing American Horror Story – 1984 . Those that know me know that I am a long time AHS fan. I have been watching it since season one. We know there are a few seasons that were not the best, but when I heard the ninth season Ryan Murphy would be paying homage to 80s slasher films I was sold!!! I then saw the promo pics and the trailer and I knew this season was going to be killer! 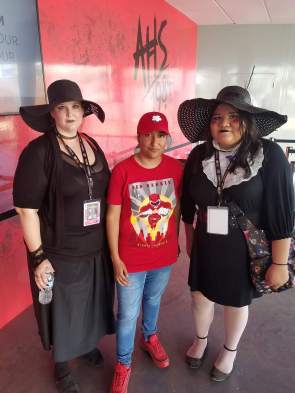 I am blessed to live in San Diego and this years SD Comic Con they had an open to the public AHS 1984 interactive horror experience it was not your typical horror maze. There were actors who guided you through Camp Redwood, very 80’s Friday the 13th props. It was very immersive, you are being chased by a killer and the actors direct you where to go! The props and visuals were amazing. They had a room with camp bunk beds and even a mini woods area. For it to have been less than 10 minutes it was highly effective and scary!!! I got to see what the vibe of the show would be like. Also tried to look around for clues for the upcoming season being the horror fan I am lol.

For those who might not be familiar with AHS. It is a horror anthology series. Every season has a different theme. Past themes have been witches, haunted house, Freakshow and more! This season as I mentioned above pays homage to the Slasher genre that became popular in the 80s, but this episode also pays homage to the Slasher that started it all Halloween which is a late 70s horror flick. I believe there is a mix of 70s, 80s and even 90s slasher movie references. Also I have always loved how Ryan Murphy incorporates historical and past events that happened in the era the show takes place in.

The first episode takes place in 1984 just like the title of the season lol. We are introduced to the main characters. Brooke who is played by Emma Roberts. If I’m not mistaken she is the virgin/final girl. I don’t know if I can buy Emma being a virgin after always playing the “bitch” roles lol. Then we get Montana the badass Aerobics addict played by Billie Lourd. Xavier played by Cody Fern, who I believe is a dope actor. He killed his performance in the last season of Apocalypse as the Antichrist.

The show goes back to the 70s where a massacre occurred at Camp Redwood. A veteran was discharged from the war when they found out he enjoyed killing. He would cut off the ears of the people he killed and put them in a necklace around his neck. After the war the only job he found was at the Camp. He killed all the camp counselors one night and cut off one ear from each victim as a trophy. He was nicknamed Mr. Jingles and ended up getting caught after the murders and placed in an insane asylum. We then flash forward to 1984 where the Camp has reopened by the only survivor of the massacre Margaret Booth.

Then they copied Michael Myers escape in Halloween. Mr. Jingles fakes a suicide and one of the asylum orderlies enters his cell and is killed. He grabs the orderlies keeps and opens up the cells for the other patients and escapes. Mr. Jingles saw an article in the newspaper about the reopening of Camp Redwood and that is why he formed his escape plan. Toward the end of the episode Mr. Jingles returns to his stomping grounds. The new camp counselors are in for a bloody time!

We are also given a treat and get to see Richard Ramirez once again aka the Night Stalker that terrorized LA! He attempts to murder Brooke in her LA apartment in the beginning of the episode, but she survives the attack. At the end of the episode we see Richard at Camp Redwood. He also made in appearance in Season 5’s Hotel, where there was an episode dedicated to Serial Killers. Definitely one of my favorite episodes of that season. This season is gonna be dope! Already on the first episode we got lots of gore, suspense, action and serial killers running on the loose!!! Pretty much sums up the 80s when serial killers were on a rampage!

Horror Movies Referenced:
1. Halloween – the escape by Mr. Jingles from the Insane Asylum
2. Friday the 13th – 80s camp, lake and woods
3. Black Christmas – 70s killer with threatening phone call
4. Raincoat – reminded me a bit of 90s I Know What You Did Last Summer
5. Texas Chainsaw Massacre

P.S. I still miss Evan Peters though, was really bummed when they said he was not going to be returning this season. He deserves too many Oscars for all his character roles in this show!

Thank you for reading my TV show review. Hope you all enjoyed it! Until next time horror fiends and hip hop heads! While you’re at it follow my blog on social media @7octoberz on Instagram and Facebook! Also follow me on Spotify, Itunes, Anchor.fm/7octoberz, Google Play Music to listen to my audio interviews under: “Nightmare on Sedgwick Avenue“.