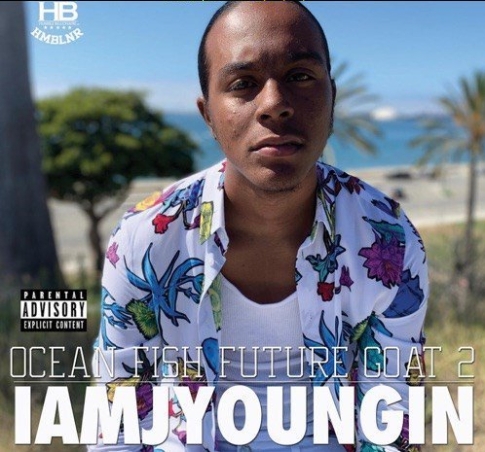 Today I will be reviewing IamJYoungin’s project titled, “Ocean Fish Future Goat 2“. I came across his music through his Marketing and PR Rep Patrice who I met at the LA Revolt Summit this past October 2019. She said he is an LBC artist who is gonna blow up soon! She said it with so much confidence I asked her for a copy of a CD or project. She handed me IamJYoungin’s new CD that he was going to drop in the next few weeks. I finally had a chance to put it on rotation and listen to it a few times. IamJYoungin aka Jeremiah is a young entrepreneur who is beyond a rapper. He has a non profit organization and has done TED talks as a young kid. He has a drive and a positive outlook of the world it bleeds into his music. His music gives you that feel good vibe as well!

The project consists of 22 tracks with a running time of 1 hour and 2 minutes. As I mentioned you definitely get a West Coast LBC beach vibe listening to this project. I don’t like comparing artists, but he reminds me of a young Snoop Dogg mixed with Nipsey Hussle, he also brings his own charisma. This is a project you can press play and just cruise in your ride. The beats are wavy and have that bass I love! You get tracks like, “Spazz“, “All Type of Ways“, “Tags” and “Change Yea“, where J is just flexin and having a good time. Then you also get a more introspective track, “Family Letter“and J shows another side to his music. Definitely one of my favorite tracks. I also loved Deneisha Rhyne’s vocals they are amazing! Also “Earned It” is a track where he raps how his hard work is why he deserves success! Then one of the tracks towards the end that surprised me was the track “La Bolsa” it shows J’s versatility as he raps in Spanish. You get a latin trap and tropical vibe! Overall it is a solid project!

The only constructive feedback I would give is to have a shorter project for the future. In the era of so much music being released it is easier to consume a short album/EP. In my opinion it gives it a higher replay value. I also know in the new era of rap autotune is popular for the youth, but I appreciate the real vocals it gives a more organic feel. Overall it was a solid project. J is a young mogul who cares about his community and doing positive things to make positive changes! His project is on all streaming platforms or follow him on IG @iamjyoungin to get physical copy of this project! Go support this rapper who is doing big things!

Thank you for reading my album review! Hope you all enjoyed it! Until next time horror fiends and hip hop heads! While you’re at it follow my blog on social media @7octoberz on Instagram and Facebook! Also follow me on Spotify, Itunes, Anchor.fm/7octoberz, Google Play Music to listen to my audio content under: “Nightmare on Sedgwick Avenue”.