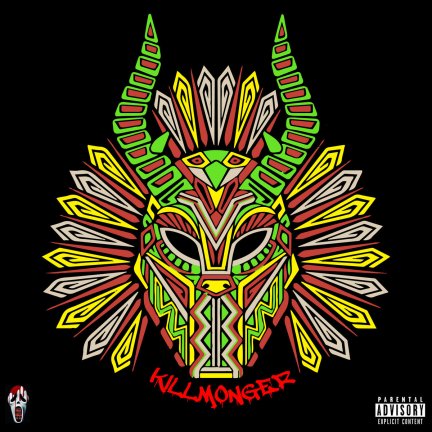 Hello everyone, Mike Mackey here with another album review! This time it’s off the prolific and notorious San Diego based rapper Sick Rick’s new album, “Killmonger.” You may know Rick as one of the architects behind The “Spookygang” collective. A collective of the absolute best talent right here in the local San Diego hip-hop scene!

Anyway, so I’m writing this review from beyond the grave. I was laid a casualty from the sheer force of this release. It melts your face off like staring into Hell itself! And there’s no going back. This album is unrelenting from beginning to end. From the moment you hear the opening sample on the first track “Faces of Death” (featuring, Guile, Speak EZ, and Smalls Uno) you know your not going to survive the onslaught.

The grimey production style, matched with the thematic elements are a stand out on this record, but what really shines is Rick’s penchant lyricism. Sick Rick is uncontested and indisputable when it comes to his lyrical ability. With notable lines like on the track “Redrum.” “Let the purge commence, all I do is murder, never attempts” and “fuck drip I drench, that’s sauce overload, pillage your village, decapitate the king on his throne”

Killmonger couldn’t be a more apt title for this release. Sick Rick goes right for the jugular and lands a kill shot. You’ll add another tick to Sick Rick’s body count after you hear this record. Now I’m off to roam the afterlife, see you on the other side! Spooky!!!

Thank you for reading my EP review! Hope you all enjoyed it! Until next time horror fiends and hip hop heads! While you’re at it follow my blog on social media @7octoberz on Instagram and Facebook! Also follow me on Spotify, iTunes, Anchor.fm/7octoberz, Google Play Music to listen to my audio content under: “Nightmare on Sedgwick Avenue”