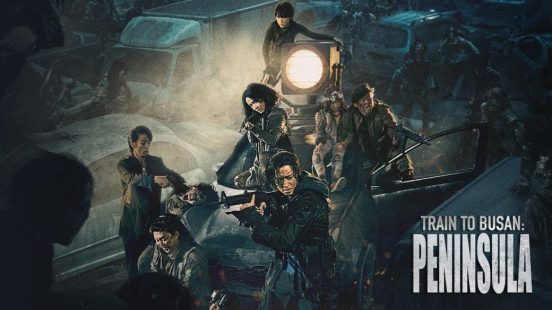 IMDB synopsis: “A zombie virus has the last 4 years spread to all South Korea. 4 Koreans in HK sail thru the blockade to Incheon for USD20,000,000 on a truck..”

Today I will be reviewing the movie, “Peninsula”, it is a South Korean horror action movie! It is a standalone sequel to Train to Busan, for those that watched that film knows it was a dope emotional rollercoaster zombie flick! This sequel didn’t let its predecessor down, we are taken into the world of a Marine Jung-Seok who is taking his sister, nephew, brother in law to a ship to take them away from the zombie outbreak. It is a bit of a spoiler, but zombie outbreak reaches the ship and his nephew is bitten, his sister doesn’t want to leave her son and gets bitten by him. Fast forward Jung is in Hong Kong depressed and turned to a world of crime.

Jung is hired with a group of others to go Incheon in the quarantined peninsula to go get an abandoned food truck which contains bags of cash totaling US$20 million. This city is run down with zombies, a modern Raccoon City! Only people left are survivors of the outbreak and rogue militia that ended stranded there. They kidnap a few of Jung’s group members and take them to this compound where they created a morbid game of hostages to battle zombies in an arena and see who survives! I won’t give up to much away, go peep it! Very dope film and deep as well!

Thank you for reading my movie review. Hope you all enjoyed it! Until next time horror fiends and hip hop heads! While you’re at it follow my blog on social media @7octoberz on Instagram and Facebook! Also follow me on YouTube and IGtv to watch my podcast “Nightmare on Sedgwick Avenue”.